How to play a game?

(If not working, hard refresh the site and try again please.)

All that sending and receiving, senders and receivers, coding and decoding.

Many times it is fun - juicy gossips, juicy curses and careless whispers.

But other times it is all about noise, interference, encoding and wrong decoding. Sometimes we are not able to decode things properly. Maybe we are not sensitive enough, we do not know enough about the message or we simply don't have capacities to sense "everything".

The decoded meaning could be different than the sender intended - Especially when the sender is some unknown monstrous entity from outer space communicating with us about their everyday problems.

But there are still many circumstances of (any) communication, that have to be taken into account.

The distance, from which the entity is communicating, could be significant - and it can even be coded into the message itself.

The temperature of the environment in which the message is being received could be also crucial. We know that nobody is really capable to focus and really think clearly, when the temperature rises above the certain point. That is why the future on earth is warm and bright.

What about the time in which the message was sent? Times change everyday (obviously) and you have to keep up! You just forgot to keep up for a second and the next thing you know, there is an alien entity communicating with you.

The other important parameter is the average level of pollution (pm 2.5 particles), because nobody wants to really chit-chat in a dirty environment.

But the message itself would also probably be coded differently. Mysterious aliens have a cultural background we don't know nothing about. Maybe the emotions or phenomena that we are experiencing on an individual or global level are just the effects of some ordinary alien actions or even attempts to communicate with us. Is it misunderstanding or overthinking?

These parameters not only influence the visual and audio representation on the alien message in the game (that messy noisy vector ball falling to earth), they also shape the "impact" visualization when the signal is successfully caught (in the middle).

The topics which form the basis of this game concept (and similar) were obviously not mine, check these guys: 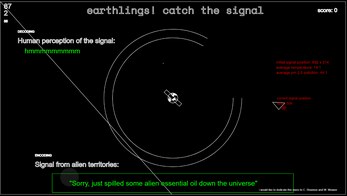 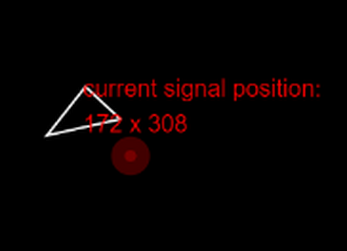 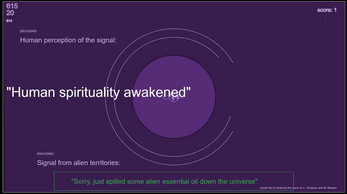 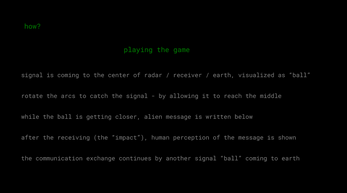